Defense Crane » About the game

Defense Crane is a game of skill and strategy that will test your skills and your decisions. Designed with Virtual reality in mind, you can play it also on monitor.

Defense Crane is the «embryo» of a more ambitious game that aims to give a twist to the genre of the «Tower Defense». Games to defend a base with towers there are many, and even some variants in that you can handle the turrets to shoot enemies. But in this case, the question is simple: what if the turret is in fact a demolition crane? Think about it. You can not shoot at targets, but the crane speed and the swing of the ball do more difficult to impact directly. Here the physical, skill at the controls and the intelligence of the player play another role to create obstacles that stop enemies, all in real time.

What are you going to find?

On the one hand, there is a part of simulation, as if you were in the cab of one of these cranes, and on the other hand, there is a strategic part, which consists to manage the incoming resources to place new cranes and to deal with the more complex levels. In addition, the game has a strong component of skill, since you have to destroy the enemies, trying to hit them with the ball of demolition, something that is not easy. Gravity and physics are very important elements in this game. 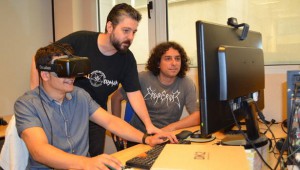 Who has not dreamed being inside a video game when he was a child? To be a part of those magical scenarios, to interact within the game along with his characters? This is the goal we have set. And who are we?. We are Alfonso & Martín, two entrepreneurs of Bizkaia. We met in a computer course being both unemployed, and there we realized that both of us love video games. Shortly after finishing the course, we begin to develop some ideas, and so, the project was taking shape little by little. Later, with the first demo which we had prepared, we have won the first edition of the Spain VR JAM – a contest of demos – organized by RealoVirtual.com. And since then, we have continued working in the game, which has evolved beyond we expected at first!!. We know that you will enjoy it.